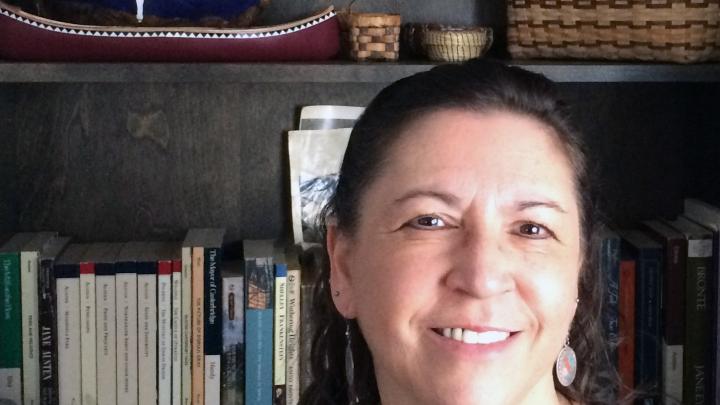 Sandra Muse Isaacs has been living in a whirlwind.
It began last July with the thesis submission. After so many years dedicated to this one climactic act, handing over her final official paper as a McMaster graduate student brought unexpected emotion Ð a little sadness, some anxiety, a few tears. But lingering on that moment was impossible.
The English and Cultural Studies PhD candidate needed to get home and help her husband pack up their things Ð the movers would be knocking on the door in 48 hours. Next stop: Halifax, Nova Scotia.
Muse Isaacs would be back, of course; she successfully defended her thesis in early September. And that timing couldn’t have been better, for just two days later she became the first Indigenous faculty member Ð Muse Isaacs is of Tsalagi (Cherokee) and Gaelic descent Ð at Saint Mary’s University, teaching her first undergraduate class as an assistant professor.
So much change, so fast would drive some people to take a pause and step back. Not so for Muse Isaacs. She’s faced many forks in the road, taken those timeouts to think on the future. Now is the time to jump in, no second thoughts, no regrets.
As the first recipient of the Harvey E. Longboat Graduate Scholarship for First Nations, Inuit and MÃ©tis Students back in 2010, her life as a student couldn’t have ended in any other way.
The journey to now
Back in the late ’80s, with a college diploma in hand, Muse Isaacs spent the next few years working as a journalist in radio, print and television. She also spent time as an adjunct professor in the Journalism for Native Peoples program at the University of Western Ontario. As the journalism profession began to change and jobs became scarce, Muse Isaacs decided to head back to the university scene, only this time she enrolled as an undergraduate in Honours English.
A few years later, she completed a Master’s in English and Creative Writing at the University of Windsor, where she had the opportunity to study under renowned Canadian author Alistair MacLeod.
Finally, her path brought her to McMaster where she completed her doctoral degree, her research focused on the Eastern Cherokee oral tradition and its role in representing an alternative history that contributes to continued sovereignty of the Cherokee culture.
As a mature Indigenous student with family responsibilities, working in the field during her PhD wasn’t easy. In 2010, the research took Muse Isaacs and her family to North Carolina and the community of her grandmother. For three years, they lived almost a thousand miles from their home on Six Nations of the Grand River Territory. The experience was something they won’t forget.
“In three year’s time, we felt that we were part of the community. We attended spiritual ceremonies, history events, and I enjoyed a full year of learning the Cherokee language at Western Carolina University.”
Muse Isaacs says the Longboat Scholarship was integral to helping defray the costs of living and completing her research in the U.S. Ð she received the annual scholarship four times during her seven years at McMaster, but the award meant so much more. It provided validation for her work as an Indigenous scholar.
“Receiving the Longboat Scholarship was such a tremendous honour, and I feel very humbled when I hear the stories about what a fantastic human being (Harvey Longboat) was, what a good Native scholar he was, what a fine educator he was. I’m eternally grateful to him, his legacy and his family,” she says.
Muse Isaacs is also thankful for the support she received from her graduate supervisor Daniel Coleman, McMaster’s School of Graduate Studies and the Indigenous Studies program. She said that as a graduate student, she sometimes felt isolated on campus. Once she made the move for her fieldwork, the isolation became even more of a challenge.
“I wouldn’t be where I am right now if not for all that support from McMaster. They believed in what I’m doing. When you’re living far away from the home you know, it makes a difference knowing that people believe in you.”
Muse Isaacs is settling into a new life, but she’s not settling for status quo. Already, she’s developing new courses. Coming soon is a course on Mi’kmaq literature Ð a first for Saint Mary’s and a fitting choice as the university is located in traditional Mi’kmaq territory and attracts Mi’kmaq students. From time to time a bout of homesickness hits, but she believes this journey to Halifax is a destiny of sorts.
“This is where I’m supposed to be. This is where I can make a difference.” […]